Home
How OMG Blog
How to Clean a Shower Head

Your shower head can gradually become clogged with deposits of minerals left behind by all the water that flows through it. It takes a long time for this to happen, and it’s likely that you won’t even notice the gradual change.

Once you reach the point of realising that you just aren’t getting the great shower you did when the shower head was new, it’s time to clean it!

There are a couple ways to clean your shower head, and they both involve vinegar. If you’re learning how to clean a shower head you should avoid a bathroom chemical product that dissolves lime or calcium deposits! Your shower head is too delicate, and you want to keep it looking nice. Save the harsher cleaning product for your toilet bowl and buy a gallon of vinegar—cheap as anything!—for this job.

Take a look at your shower head, and if you see brownish or yellowish colorations around the holes for the water, you are looking at the lime and calcium that has accumulated.

If you don’t want to remove the shower head from the shower, then this is your best bet. You’ll need a plastic bag—say, a litre-size freezer storage bag—a rubber band, and a large bottle of vinegar.

If your shower head comes attached to a hose, take it out of its rest and bring it down so that you’re not fighting gravity. If there is no hose, you’ll have to stretch to reach the shower head but you can still do this.

Pour vinegar into the plastic bag about halfway up. Keeping the bag upright so the vinegar does not spill out, immerse the shower head into the bag. Fasten it with the rubber band, twisting the band around several times to hold the bag on securely.

Allow the shower head to lay in the bag of vinegar overnight—or at least for several hours. When you take the bag off and dump out the vinegar, turn on the water and it should flow freely out of the shower head—just like a brand-new unit.

If you have a shower head that’s not on the end of a hose, and you are having difficulty getting the bag of vinegar to stay on, unscrew the shower head to remove it.

Take it to your kitchen where you will have a pot large enough to hold the shower head. Put the shower head in the pot and fill it with enough vinegar to make the shower head float. Again, leave it in there overnight. You can check it before you reinstall it to see if you’ve gotten rid of the lime and calcium deposits.

Well, you don’t need to floss, but a good brushing is certainly in order. Once you’ve soaked your shower head by either method, take a soft-bristled toothbrush; dip it in the vinegar you’ve been using, and scrub the surface of your shower head.

There’s one last thing you can do if it looks like you still see some build-up in the shower head holes: Just take a safety pin and poke into each of the holes, particularly around the edges. If the lime and calcium haven’t washed away, they will be sufficiently softened to get rid of them using the pin.

There you have it—step into your shower with your favourite soap or body gel and enjoy the new feel of the spray.

It’s going to seem like you’ve just purchased a brand-new shower head, but all you paid for was the vinegar.

What’s easier than that? If you have a shower head cleaning tip, let us know in the comments area! 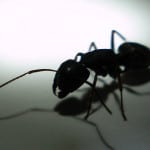 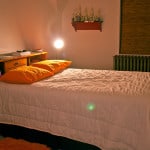 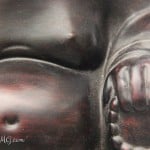