Mount Pulag is the second-highest mountain in the Philippines and the highest in Luzon at 2922 meters above sea level.

It is bordered by three provinces: Benguet, Ifugao and Nueva Vizcaya.

Climbs to its summit feature evergreen forests and clear streams but the highlight is the breathtaking view of a “sea of clouds” that backdrop its grassland summit. Recently it has become famous as among mountain climbing circles. 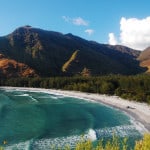