Home
How OMG Blog
All About Bugs and Insects

If you want to learn about bugs these days, you have to be very specific.  We are going to assume that you do not want to know about computer programming errors, tiny bacteria that make you sick, covert listening devices, or certain hybrid dogs.  Nor are we talking about a certain carrot-chewing bunny.  This webpage is about the very first types of bugs, also known as arthropods.

An arthropod is any critter with a tiny exoskeleton, a segmented body, and multiple legs.  The word comes to us from the Greek and means jointed feet, and this classification includes insects, spiders, centipedes, and some crustaceans. The common six-legged insects are called hexapods.  Spiders, centipedes, and mites are known as chelicerates, because their first set of legs is just above the mouth.  Centipedes and millipedes are classified as myriapods, and most crustaceans are the sea-creatures we regard as elegant cuisine-excepting, of course, the 14-legged woodlice.  A bug is able to utilize each of its legs very skillfully, and scientists have studied their organizational skills for centuries.

The exoskeleton is the external skeleton, made up of chitin and in some cases calcium carbonate.  It provides protection from other insects or animals, allows for excretion, provides sensory input, and gives shape to the insect.

Inside of a bug, you’ll find a space for his internal organs, called a hemocoel.  The  hemocoel allows a fluid called hemolymph, made up of blood and lymph cells, to circulate freely among the organs.  His nerve cells run along his belly and through his various segments; they’re called ventral nerve cords.  Where the ends meet up, usually around the esophagus, serves as the insect’s brain.

Insects are known for their compound eyes.  Each eye can contain as many as thousands of photoreceptor cells.  These cells receive input from the various eye units, which point outward from the insect in different directions.  The eyes are capable of detecting very quick movements but in most cases, they cannot perceive much more than light.  Spiders are an exception, with eyes that truly do swivel to watch whatever’s watching them.

Insects that live on or in the earth reproduce through internal fertilization.  This applies even if the fertilizing sperm is picked up from the ground by one of the appendages.  Insects that live in water can achieve fertilization either internally or externally.  All insects are born from eggs.  Some people argue that scorpions are born alive; the eggs hatch inside the mother just prior to birth.  Some bugs, like those scorpion moms, make very good mothers.  Others just lay their eggs and move on.

Up until the 1970s, scientists believed that there were many phyla of insects.  However, recent studies suggest that all bugs originate from one phylum.  This means that eons and eons ago, there was one big nasty granddaddy bug from which all other species eventually evolved.

What is the good that comes from bugs?  They are known to facilitate plant pollination.  Bees produce honey, an industry unto itself.  We eat (most) crustaceans.  Some cultures regard bugs as tasty.  Certain natives of Cambodia and Venezuela cook and eat tarantulas.  A little Central American winged creature called the cochineal produces red dye, and scientists are exploring the usefulness of a few other byproducts.  Other than the fact that bugs eat one another, they serve little other use.

On the other hand, they infest crops.  Their bites and stings are seldom harmful, but the blood-sucking types spread diseases among mammals.  They have created havoc in quite a few motion pictures over the years.  Which one is your favorite?

Some zoo’s also have a range of bugs you can look at. Just contact your zoo to check for a bug section and open times. 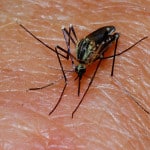