CDs have been around for a very long time and continue to exist even if DVDs and Blu-ray discs are dominating.

This is because audio CDs are still the primary medium for storing audio files so they can be played on various systems that support CD playback.

However, DJs at first cannot make use of the discs because of the limitations of the player.

Unlike turntables that use vinyl, DJs cannot utilize their DJ skills involving scratching and seeking to get the beats in sync.

All of this changed with the introduction of DJ CD players.

DJ CD players (also known as CDJs) work just like CD players on how they read discs and play music out of a connected sound source.  What makes them different are their analogue control features where the CD playback can be controlled in real-time the same way a vinyl can.  The way these DJ CD players are designed show that these players are made to ease the transition from vinyl disc jockeying to CDs as newer music are sold in CDs.

Pioneer is a known maker of DJ CD players with their earliest models not supporting any vinyl features at all and only featured pitch control and sound effects.  Current models today feature a vinyl mode which accurately emulates a traditional turntable complete with scratching sounds and all.  Placing the CD in the CDJ basically transforms the disc into a vinyl where analogue control is done by controlling the large jog dial.

Current DJ CD players have many advantages over turntables even though their scratching emulation isn’t perfect.  Also included with most DJ CD players is the ability to cue tracks which help greatly in putting songs in sync with the other song that is playing to ensure a very smooth flow for live performance or recording.  Some of the CDJs have LCD displays that show useful information including the displaying of the CD-TEXT for knowing the title of the track as well as the BPM for reference when mixing with other tracks.  There are a number of other neat controls that DJs can play around with for some creative outputs.

With more DJs relying on their laptops and desktops to play better, DJ CD players are evolving even more with the latest models being able to connect to laptops via USB to better integrate with the other connected USB components.  Later models are also able to read MP3 files from memory sticks or flash drives.  It may also double as a MIDI controller to better operate some of the existing DJ software that support it.

So many DJ CD players have been sold for usage in big events while turntables are still being used by classic DJs that feel very comfortable and like the idea of natural scratching.  However, these CDJs are looking to make an even deeper impact as they closely integrate with other digital DJ components. 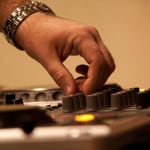