In sunny old Cambridge a disabled man has been pulled over by police and breathalysed.

It may sound like a comedy sketch out of Little Britain but I kid you not: read the article here! Chris Mullean had just polished off a bottle of brandy during a drinking session with some of his mates and decided to leave his flat. It was around midnight and a lairy chris saddled his mobility scooter and planned to meet his friends in the town centre. 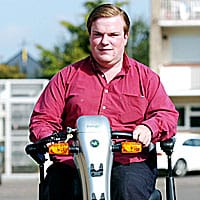 However the sight of a pissed disabled man enjoying a night time ride was too much for the locals of Cambridge. The police where called and a squad car sent out to pick up this “vagrant.” Even though Chris’s mobility scooter only had a max speed of 8mph he was given a roadside breathalyser test. Sadly the bottle of brandy had made its way into Chris’s bloodstream and he failed the test. Luckily Chris was not arrested but he was given a lift home in the back of a police car.

Chris argues that it was waste of police time. But at least the Cops had an interesting story to tell their significant other.