Home
How OMG Blog
How to Get Rid of Bush Flies

The way to get rid of bush flies is to understand the nature of this pest. For instance like the mosquito, it is the female that is the pest. What the female is looking for is protein to help develop her ovaries and in turn the eggs. Males generally hang around to be near the females since they do not require as much protein. The ratio is generally 3 females to 1 male fly 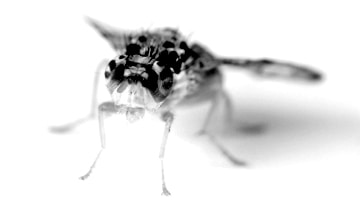 How they get protein from a human is though your tears, blood and the mucus of the nose. And most importantly your feces. Feces is the bush flies favorite place to lay eggs so that is why you see them hanging around where there has been feces of animals.

Interesting facts are; if you deprive a female fly of protein it takes two weeks for their fertility to
slow down and five weeks before they are sterile. Another interesting fact is that it is the smallest females that are really the ones who are really persistent.

That is because while they were larvae they received little or quality protein so as an adult she needs extra protein to develop her eggs. However even though she may get extra protein she will not grow any bigger because of her exo-skeleton. So there are not different types of bush flies just different sizes. Nice to know but still not much help in how to get rid of bush flies.

As far as where the Bush Fly came from they were always in Australia but in much smaller numbers. It wasn’t until people brought over the first cows in 1788 that the numbers got really out of hand. Reason being is that cows can drop up to twelve piles of feces a day so plenty of dung to get protein and lay their eggs in.

Now days there about twenty million cows in Australia and multiply that number with twelve and you can see why there is a problem. Another thing to note is the numbers of flies change with the weather. When it is warmer and drier it is ideal conditions for the fly to breed. How the fly spreads is with the wind.

The wind picks up pregnant females and deposit them in the South where there are good conditions to lay the eggs. Well we know if we get rid of the cows we know how to get rid of bush flies. But since that isn’t going to happen lets see if there are other ways.

This is where the Dung Beetle comes in as a natural pesticide to ger rid of bush flies. In certain parts of Australia there certain types of dung beetle; take for instance in Western Australia there is the Onthophagus ferox and in South-East Australia it is the Onthophagus australis. However the native dung beetles are not up to the task. Cow piles are just too big and wet for them and the native beetles generally live in the forest and not in the cow pasture.

So today there are about 50 types of beetles imported to deal with the fly problem. These beetles are able to thrive on the course fibrous feces. These beetles work by doing what they do best…break up the feces, eating the dung, and killing the larvae and eggs. In short the more dung beetles present in the pasture the less flies survive. This one of the ways of how to get rid of the bush fly.

Dung Beetles are not the only natural enemy of the bush fly; so are certain species of birds and other insects like dragonflies. The Specid wasp also likes to dine on bush flies. They kill a fly, bring it to the nest and use it as provision like we would dried meat. The biggest natural danger to bush flies are from a certain kind of worm…the Habronema and the Heterotylenchus nematodes. That was just a brief summery of natural ways of how to get rid of bush flies.

Then there are non-natural fly killers…Fly sprays.

Mortein: This one paralysis the central nervous system. How the spray gets in is by the hair follicles.
Other Common repellents include:

DEET is the one that you really need to be extra careful with because of the potential harm done to humans. All of this is a brief look at how to get rid of bush flies.