Today, I present another Irish surnames spotlight, this time focusing on Burns. Like the name Dillon that I discussed in a previous Irish surname spotlight post, the name Burns originally comes from outside of Ireland (in this case, neighboring Scotland). However, also like Dillon, the name Burns has become so ingrained in Irish society since its introduction in the early 17th century that it’s now virtually indistinguishable from purely native names. If your last name is Burns, or you have ancestors who used it, read on, because this is for you!

In addition to being a native name of Scottish immigrants to Ireland in the 17th century, the name Burns was also adopted by some native Irish families as an Anglicized version of their traditional Celtic names. Examples of Irish families who did this include the MacConboirne family of County Mayo, the O’Byrne and MacBrin families of County Ulster, and the O’Broin family of County Wicklow. Among Irish surnames, Burns is especially popular in the counties of Ulster and Antrim today, where approximately 2/3 of the people bearing the name in Ireland live.

The name is of Middle English origin and refers to someone who lived near a small river or stream. It gained popularity among both Scottish and Irish families alike after the family of poet Robert Burns moved from Burnhouse near Loch Etive to Forfar, and subsequently became known as the Campbells of Burnses. Because of this association, the famed poet began using Burns as his last name, rather than Burnses, which inspired other families to adopt the name.

Among Irish surnames, Burns has had its fair share of famous sons and daughters. Bearers of the name in Ireland and the United States have included well-known politicians, actors, musicians, writers, illustrators, sports figures, painters, inventors, and more. So, if you bear this ancient and prolific name, be proud! You’re in good Irish company! 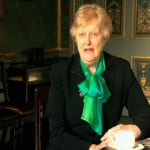