Home
How OMG Blog
It’s Time to Share the Surprises You’ve Found in Your Irish Tree!

Things are never dull with the Irish, so it’s almost a given that every Irish tree has its share of surprises. I recently found a big one in mine. I’ll share it here, then you think of some of your own unexpected finds, shocking discoveries, and wild tales in your own Irish family and share them here. We’d all love to hear about your unpredictable and tempestuous Irish ancestors!

My most recent surprise in my Irish tree came just a few weeks ago, when the coroner’s records from the inquest into the death of my great-great grandfather, Edward Dillon, arrived in the mail (Edward’s parents, Martin and Margaret Dillon, were direct immigrants from Ireland to the United States). Several years ago, my grandfather’s sister told me that Edward Dillon was killed by gypsies in a horse deal gone bad. She even said that one of her grandsons had written a report on the incident for school. However, I only had her word and family legend to go on at that point, and it was to be quite some time before I found the clue that led me in the right direction to verify this story.

Since Edward Dillon and the rest of my immigrant Irish ancestors from my dad’s side of the family lived in New Garden, Chester County, Pennsylvania during the 19th and early 2oth centuries (when Edward was alive), I regularly check the website of the Chester County Archives. I’ve found some good bits of information there, including the marriage record for Edward and his wife, Hannah Burns, as well as my grandmother Margaret Dillon’s marriage to George Washington Copes (her only husband, but still undetermined whether he was the father of her son–and my grandfather–Walter Francis Copes…..you can see my post HERE for more information on THAT particular tale!). I also discovered the guardianship papers for Edward and Hannah’s two youngest daughters, which were generated after Hannah died (Edward had died previously) when they were still minors. New material is being added to the site all the time, so I was very pleased to check there one day and see an index of coroner’s inquests that included the name of Edward Dillon.

Needless to say, I sent away for the coroner’s inquest as soon as possible! When it came a few weeks ago, it certainly shed a lot of light on the truth of the old family legend! Here’s what it said:

“Inquisition made upon body of Edward Dillon at New Garden Twp on the 2nd day of April A.D. 1902.

S. Wickersham. W. H. Baily, T. G. Webb, George P. Reardon, G. T. Quarrl, and T. Tanreid do say after hearing testimony that Ed. Dillon came to his death as result of blows inflicted by a piece of wood by Jos. Gardner, otherwise known as the Gypsy Horse Doctor in New Garden on evening of the 25th day of Mar. 1902.

So, it appears there is some truth to the old legend in my Irish tree! Edward was killed by a man known as the Gypsy Horse Doctor. That shows why my grandfather’s sister thought Edward was killed by a gypsy in a horse deal gone bad. The killer was referred to as a gypsy and he dealt with horses in some way. What a surprise! Now, I need to find the sheriff’s report of investigation into the incident in which Edward was killed (if it exists), and hopefully find out exactly WHY Joseph Gardner the Gypsy Horse Doctor and Edward had the altercation that led to Edward’s bludgeoning. Then I can put ALL of the pieces of this family puzzle together at last!

What surprises have you found in your own Irish tree? Every Irish family has a tale to tell! Leave a comment below and share yours with the world! 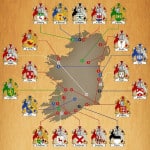