Substituting a high beta-glucan barley, such as pearl barley, for other carbohydrates can help you lose abdominal fat.  A Japanese study found that those eating barley in place of rice had less visceral fat, lower BMI’s and lower waist circumferences.  Heart disease risk factors such as total cholesterol and LDL cholesterol were also significantly improved.

Pearl barley is not a whole grain, as the outer husk is removed.  Beta-glucon is a a soluble fiber that is found in barley and oats that improves insulin sensitivity.  Substituting oats for other carbohydrates is likely to have the same benefit. 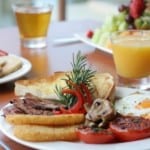