Home
How OMG Blog
Get all your Bajaj Scooter Questions Answered!

When I went to Kenya last summer I remember feeling very foolish when I thought I saw hundreds of Vespa scooters riding around the city of Mombassa.

On close inspection the scooters revealed themselves as being made by the Indian scooter manufacturer Bajaj.

Vinny from Motorcycle diaries recently mentioned these scooters in a comment from my last post – which reminded me to do a little research into these machines.

The first thing I noticed when trying to learn about these scooters is how little there is available. Wikipedia has a paragraph of little or no value and don’t get me started on the official Indian Bajaj website (i wont even link – its that bad!)

Here are some basic stats:

The Bajaj scooter is produced by Bajaj auto who is India’s largest two and three wheeled manufacturer. Bajaj auto is also the fourth largest producer of 2 and 3 wheeled vehicles in the world!

One of the reasons that many of the Bajaj scooters look like Vespa’s is probably due to the fact that 40 years ago Bajaj was allowed to build Vespa scooters under licence from Piaggio. It was only in the mid 1970’s that Bajaj split from Piaggio and started with their own designs. But obviously the design of the Vespa still existed in the minds of the Bajaj designers which could account for why I saw so many Vespa esque scooters bombing around Kenya.

At the moment Bajaj auto is marketing the “Kristal” which looks more like a Honda than a Vespa. I am yet to see a Baja in the UK but it does seem to be the case that more and more are selling in the US.

Has anyone seen a Bajaj scooter? If so please comment in the box below.

Also I have seen that Direct Bikes are selling some similar “cheap” scooters that people might be interested (this is only available for the UK – sorry guys.) 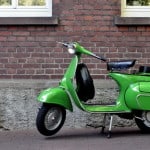 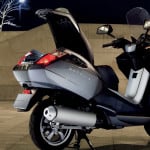