There’s a whole lot more to the Solar System than you learned from good old Mrs. Magillicuddy teaching science class back in the early school days.

People used to think of it as just a simply vast place, consisting of nothing more than the Sun surrounded placidly by its nine revolving planets plus a few moons and meteoroids sprinkled in here and there.

What scientists have discovered over the past 50 years presents a much more exciting, startling piece of the universe. Let’s take a look at what’s floating around us in the Great Beyond these days. 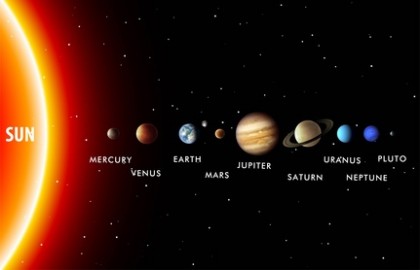 Yes, it’s still as true now as it was back in the olden days: The Sun sits majestically amidst the planets and the orbs that revolve around it, much like everybody dancing   ˊround the cheese in The Farmer in the Dell. The Sun measures about 1,392,000 km in diameter, making up about 99 percent of all the mass in the entire solar system. It’s roughly three-quarters hydrogen and one-quarter helium, and the energy it creates from the nuclear fusion of hydrogen into helium keeps it glowing bright in the universe around us. Scientists classify it as a G-type main sequence star, denoting “the ionisation of its chromosphere.” What that refers to is the atomic activity that takes place in the star’s second layer as well as the spectral features of its luminosity.

There are eight planets orbiting the Sun, not nine as you may have been taught. In order of distance from the Sun, they include Mercury, Venus, Earth, Mars, Jupiter, Saturn, Uranus, and Neptune.  Notice what powerful names they have—that’s because people gave them the names of the ancient gods to show their respect for the planets’ mysterious majesty. Initially, in 1930, Pluto was also identified as a planet, but around 2006 it was demoted to the status of dwarf planet—more about that later!

So how does a planet get to be a planet? By definition, it’s any astronomical body with its mass held together through its own gravity, and with that gravity exerting sufficient power to sweep the planet’s orbit free of any nearby astronomical debris. Six of the planets, including Earth, have moons.

Four of the planets have hard, rocky surfaces. They are the first four closest to the Sun, obviously including the Earth as well as Mercury, Venus, and Mars. Mostly they are made of silicon-type rocks with an iron or mixed-metal core. The Moon also has a silica-type composition, but as it orbits the Earth without sufficient gravity to initiate its own orbit, it remains a satellite.

The second four planets—again, listed according to distance from the Sun—include Jupiter, Saturn, Uranus, and Neptune. Jupiter and Saturn are known as true gas giants, made up of hydrogen and helium, the same as the Sun but much less hot. The last two, Uranus and Neptune, are so far away from the Sun that they are icy cold, made up largely of water, ammonia, and methane. Scientists call them the “ice giants.”

As mentioned above, Pluto—another icy entity—was reclassified from planet to dwarf planet in 2006. Even when it was discovered in 1930 and named as a planet, many scientists felt that it did not have the same qualities as the other planets and should not be classified with them. But in 2005, an astronomical body named Eris was discovered, even larger than Pluto. Scientists argued amongst themselves for quite a while before they reached the consensus that Pluto and Eris were two of a new breed of planet, with enough gravity to hold their mass together but not strong enough to keep objects from entering their orbits.

Pluto and Eris are actually two of the many bodies known to occupy a disc-shaped area named the Kuiper Belt, an area beyond Neptune that contains many tiny, icy worlds. There are also three other dwarf planets in our Solar System: Makemake, Ceres, and Haumea, and all of them are, like Pluto and the regular planets, named after gods. Scientists chose Eris’s name because of the all the arguments it caused among them—Eris represents the Greek goddess of discord and strife.  Makemake (mah-kee-mah-kee) honors the god of fertility worshiped by the Rapanui tribe on Easter Island. Haumea has its name from the Hawaiian goddess of fertility and childbirth.  Three of these five dwarf planets have moons.

The Kuiper Belt, the Oort Cloud, and an AU.

The Earth is relatively close to the Sun, compared with the more distant planets and other astronomical bodies. The Kuiper Belt, which is beyond Neptune as already mentioned, contains trillions of icy bodies that take about 200 years to complete a solar orbit.

Then there is the Oort Cloud, an area even farther away—about 100,000 AU from the Sun. What’s an AU? It stands for astronomical unit, and it’s the distance between the Earth and the Sun, which is 149 million kilometers or 93 million miles.  Scientists believe that other stars may have more gravitational influence than the Sun in this nether region of space.  One of the bodies believed to come from the Oort Cloud is Sedna, a body that takes 10,500 years to complete its orbit around the Sun. Sedna is named after an Inuit goddess that resides at the bottom of the iciest area of the ocean.  Both the Kuiper Belt and the Oort Cloud, named after the scientists who discovered them, most likely formed from the detritus that occurred when the solar system evolved some 4.6 billion years ago.

We owe much of what we know about comets to the ancients, especially the Chinese, who documented the appearance of comets very thoroughly. Many of them come from the Oort Cloud, and if you’ve watched a couple space movies like 1998’s Armageddon, you already know that comets have the rather less romantic names of their discoverers instead of the names of gods. Today we know that comets are made from the same materials as planets and could even form the beginnings of a planet.

Comets begin with a tiny frozen nucleus of dust or frozen gases that grows as it travels, and it never takes them more than 200 years to complete a solar orbit. As a comet nears the Sun, it develops a warm aura or coma. The United States sent a lander that reached within 147 miles of a comet in 2004, and the European Space Agency has sent a lander called the Rosetta to explore a comet known as Churyumov-Gerasimenko.

Meteoroids. Meteoroids are small pieces of debris that float around in space controlled by the gravity of other bodies. We notice them when they breach the Earth’s atmosphere, with the friction between the atmosphere and the meteoroid creating a bright trail of light that’s always an amazing display. As they travel through the atmosphere they are called meteors; when the hit the ground, they are meteorites.

So What’s Going On In Space?

Countries all over the globe have active space programs of their own or work with other countries to learn more about the solar system. Besides the European Space Agency’s attempt to land an unmanned space vehicle on a comet, the Chinese government is aiming for several unmanned lunar landings, with hopes to progress to actual manned missions. While the United States effectively ended its shuttle program, there are other plans afoot with an unmanned lander heading toward Mars, complete with a rover aptly named the Curiosity. USA’s scientists will watch this landing via the Deep Space Communication Centre located in Canberra, Australia.  India is working on launch vehicles to aid in the placement of satellites in orbit. Both Russia and the United States maintain crews on the International Space Station, and Japan will also send an astronaut.

There’s so much to learn about the solar system—it’s great reading or watching stories about invaders from space. We get the same kind of thrill from movies or books about our men and women traveling out to the Moon or Mars or Jupiter.

Read More About It

In June 1977, the American president sent a message on an unmanned spacecraft that traveled beyond the boundaries of the solar system, inviting a response from aliens. Have they answered yet? 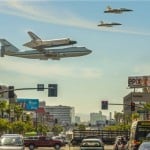 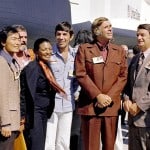