If your Irish genealogical research involves a hard-to-find immigrant to the United States, you may feel like you’ve hit a brick wall. Many Irish immigrants came to the USA and then essentially disappeared from the historical record. Because many of these immigrants came to the USA at a time when Irish heritage was not valued by the masses, a large number of employers, schools, and even city governments did not bother keeping records on them. If they were killed during an accident, their families in Ireland may have never known what happened to them. Even if they survived, there may be no records that survive to allow modern descendants to identify them.

That’s why the Irish immigrant advertisements that were placed in the Boston Pilot between 1831 and 1920 are so valuable to modern Irish genealogical research. This little known and hardly used source of information is often the only place any record of “missing” Irish ancestors in America can be found.

Starting in 1831, the Boston Pilot–a nationally distributed newspaper, printed over 45,000 ads in their “missing friends” section. These ads were taken out by friends and relatives of Irish immigrants to America who had not heard from their loved ones in some time and were trying to track them down in an age where the Internet, private investigators, and mass media did not exist.

The “missing friends” ads contain a wealth of genealogical information. Ads typically referred to the place of origin of both the missing person and the person taking out the ad. Many ads also described the method and route of immigration the missing person took, as well as the name of the ship. This resource is especially valuable for finding information on women, as females did not often turn up in naturalization records of the time.

If you’re working on Irish genealogical research on immigrants to America, this under-used resource is one you should consider. In some instances, it may be the only link to your family’s Irish origins that still exists. The “missing friends” advertisements are available online in a searchable database at the website of the New England Historic and Genealogical Society, and is accessible by paid membership to the society. If you’ve got Irish ancestors, it’s well worth joining to be able to access this incredibly rich and valuable record source. 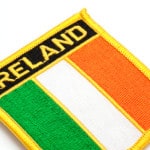