Home
How OMG Blog
All About Tattoo Flashes

What, you might be wondering, are tattoo flashes?  The term brings many images to mind.  Actually, tattoo flashes are nothing more than ideas.  They are the pictures that will inspire you when you walk into a tattoo parlor, knowing that you want to get a tattoo but having absolutely no idea what it should be.

Tattooing dates back to at least 9,500 B.C., during the Neolithic Era-also known as the New Stone Age.   Japan wins the prize as the site of the earliest tattoos.  This practice of decorating the body with permanent inks quickly became popular in most Eurasian cultures.  And then it spread abroad…

In 1991 scientists discovered the unfortunate body of Otzi the Iceman:  He was found on the border between Italy and Austria, some five thousand years after his demise, with almost five dozen carbon drawings on the lower half of his body. Ultimately, just about all cultures were tattooed:  The ancient Egyptians were tattooed.  The Celts of the British Isles and the Huns from central Europe displayed marked tattooing.  The word itself comes from the Polynesian.

Tattooing reached a breakthrough in modern-day culture when popular blues singer Janis Joplin made it known she had been tattooed with a wristlet and “a little something for the boys” -a heart inked on her bosom.  These days, who doesn’t recognise an Ed Hardy design when he sees one?

The Harris Poll has taken the public’s pulse a couple times in the past decade on the matter of tattooing.  In 2003 their poll queried which groups of people were more likely to get them (gays over straights, Westerners over Easterners, Democrats over Republicans).   Among those who regretted their tattoos, the most common reason was because the tattoo contained a name the person no longer wished to display.  A 2008 poll revealed that 17% of American adults have a tattoo of one kind or another.

Tattoo flashes come from proprietary designs drawn by tattoo artists.  You can find them drawn in any size, but whether they are singly displayed or grouped on a page it’s generally on 11×14 inch size paper (think: legal paper).  Generally, a design is drawn on the paper or cardboard, and then it’s reproduced for the express purpose of sharing it with others.  Sometimes you just acquire the drawing itself, and sometimes you also get an outline drawing to guide the artist who’s inking it.

Suppose you know you want a heart or a star, but you have no other idea?  You can choose from sheets of tattoo flashes with all styles of these and other designs, drawn with systematic precision or wild abandon.  On the internet, you can look at other people’s drawings to help you decide which direction to go.  Maybe you want something symbolic:

Whether you get something to symbolise where you went to college or your favourite football team, your astrology sign, tarot symbols, or something spiritual, there are tattoo flashes guaranteed to give you great ideas.  Your choices are limitless! 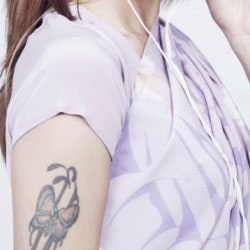